A Leap of Science: The Life and Language of OA Part III

After letting knee pain gradually slow her down, Dr. Lawson had finally found a way to keep her symptoms under control.

After letting knee pain gradually slow her down, Dr. Lawson had finally found a way to keep her symptoms under control. She said “Between health supplements and HA injections my knees were feeling good,” she was able to keep up with her garden, SWAT team, and work without pain. But being a physician at Reflex means she knows that when someone has knee osteoarthritis, the degeneration of her knees is all but inevitable. Not one to pull back from her activities, she jumped at the chance for a treatment that could potentially save her knees: a Stem Cell injection with PRP.

Since Reflex opened, we have been tracking medical research on Stem Cell therapy for knee OA. Dr. Riggs has always said that was the future of treating and finding a cure for osteoarthritis, and the wait for that treatment is over.

Enough clinical research has shown substantial benefits with minimal adverse effects to start offering the treatment in our clinic. Knowing that stem cell therapy was the best available option, with the potential to eliminate the need of her ever pursuing knee replacement surgery, Dr. Lawson was one of the first lined up to receive a stem cell injection at our clinic. 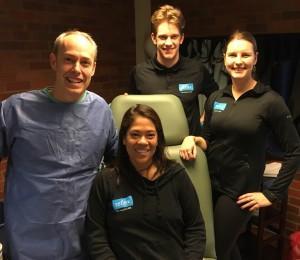 The treatment at Reflex is a relatively simple outpatient procedure, which only takes about two hours, consisting of a simple blood draw and small liposuction. Then the PRP and Stem cells are drawn out using a centrifuge, combined and injected directly into the knee. Dr. Lawson said “the liposuction didn’t hurt but certainly felt odd, mostly a pinching sensation. I felt nothing during the actual injection. The day after was the worst; I was sore and just wanted to rest. But three days after the appointment, I was back to feeling 90%”.

On average, patients are expected to start feeling the effects of the procedure about three months after the injection. Dr. Lawson said she noticed a difference in her knees after only seven weeks. “I know that’s too soon,” she says “but they feel better already.” We only expect her results to improve, both symptomatically and in the knee joint itself.

“My knees are feeling stronger, and I’m hopeful for the first time that my knee pain won’t stop me from doing what I want. I’m going to ski again” she said determinedly.

Dr. Lawson says she understands that the treatment isn’ t for everyone, but that if you’re a candidate, she would highly recommend it. She plans to get another treatment in a few years if it’s needed, she figures “why not beat the disease.”

Contact us to learn more about your non-surgical treatment options for knee osteoarthritis.