Get the Facts About Over the Counter Pain Relievers

Over the counter pain relievers are fantastic for the occasional headache or injury. But because these medications are so readily available, it can be easy to overuse them. 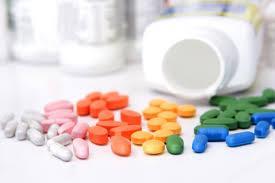 Over the counter pain relievers are fantastic for the occasional headache or injury. But because these medications are so readily available, it can be easy to overuse them.

Most are classified as NSAIDS – Non Steroidal Anti-Inflammatory Drugs: They’re intended to relieve mild to moderate pain, lower fevers, and reduce inflammation or swelling. NSAIDS do this by blocking the chemicals that tell your body you’re feeling pain.

However, if they are used long-term they can cause serious side effects.

The most common NSAIDS can be found in medications we encounter everyday:

All of the NSAIDS listed above have been known to cause high blood pressure, heartburn, ulcers, gastrointestinal (GI) bleeding, and kidney damage. Long-term exposure to Ibuprofen, Ketoprofen, and Naproxen can also lead to heart attack or stroke.

The primary disadvantage of NSAIDS is that they treat symptoms but not the underlying problem. If you find that you are taking them for longer than 10 days, visit your doctor to see what is really causing the pain and what can be done about it.

Remember, pain is the body’s alert system. It tells you when an injury or disease needs to be addressed. Without it the problem will only continue and potentially worsen.

If you have been experiencing intermittent or chronic knee pain, call to schedule an evaluation with one of our physicians.