In our society, it can be difficult to weed out what new information we learn is accurate and worthwhile, versus what the newest fad is. Are Superfoods really ‘super’ and should you be joining a cross fit gym to get into shape?

In our society, it can be difficult to weed out what new information we learn is accurate and worthwhile, versus what the newest fad is. Are Superfoods really ‘super’ and should you be joining a cross fit gym to get into shape? It’s hard to sort out the quality information from the trendy filler, as well as know what actually applies to you. So this week we decided to look into a type of exercise that’s growing in popularity. You’ve probably done it before…ever jumped on a trampoline? That type of exercise is actually called ‘Rebounding’, and it turns out that it’s not just for kids. In fact, exercising on a trampoline is great for people with knee and joint ailments. It’s much easier on the body than high-impact exercises such as running. In fact, NASA performed a study on rebounding and declared it the most efficient and effective form of exercise devised by man.

Rebounding is an exercise that has zero to do with a basketball, it’s nothing more than an up and down bouncing motion on a trampoline. It doesn’t require an expensive gym membership, specific shoes (a good athletic shoe will do just fine), or a personal trainer. You can actually bounce so little that your feet aren’t ever out of touch with the trampoline, or you can bounce up to six inches in the air and get a great workout. The difference depends on your specific comfort, fitness, and pain levels. That’s all there is to the exercise.

First and foremost, the motion is extremely easy on your joints. In the NASA study referenced above, the researchers found that the G-force absorbed on the ankle (and knee to a lesser extent) while running was twice that of what the back of the head absorbed at the same time. In short, your ankles and knees take the brunt of the abuse when running. While with rebounding the G-force was almost identical from the back of the head through the foot. That is why it’s so efficient – your entire body is absorbing the impact, which is already minimal, making the pressure on your knees (compared to running) even less.

NASA also found that with the same amount of effort your body gets up to 68% more benefit with rebounding than with running. You get the benefits of running without having to work your body as hard or feeling as exhausted. 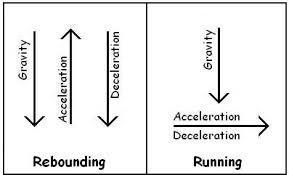 Believe it or not, rebounding is also great for osteoporosis. When astronauts are in space they are exposed to a weightless atmosphere that is horrible for bone mineralization. When returning from space, the astronauts bone density has been significantly reduced and needs replenishment quickly. Rebounding is used to help restore bone density and reverse osteoporosis without an increased injury risk. With the rampant rise in osteoporosis in America, rebounding could be a great way to help strengthen bones and get a workout at the same time.

Is Rebounding For You?

Like any exercise, there are risks to be aware of with rebounding, and even though it is a very low impact exercise, it’s not for everyone. If you have severe knee or joint pain you’ll want to talk with your doctor to see if it is right for you. You never want to do an exercise that causes pain, and you certainly don’t want to exacerbate any existing problems you may have. Otherwise, rebounding could be the low impact, enjoyable work out you’ve been waiting for. Talk it over with your health professional and give it a try.