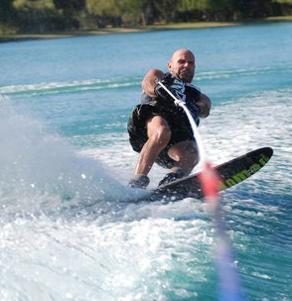 “I have been passionate about waterskiing for most of my 59 years. When you talk about waterskiing, most people picture someone on two skis cruising down the lake. When you add competition to the equation, things get intense. Slalom waterskiing is very demanding. When I was in my 20s, I broke my knee and tore most of the knee ligaments. After having reconstructive surgery, it was never the same. As I got older, it got progressively worse. In 2005, an orthopedic surgeon did arthroscopic surgery to repair what was left of the meniscus. After the surgery, he told me I would eventually need a total knee replacement. I actually came close to making the appointment until my son told me about a new procedure he and the doctors at the Reflex Clinic were doing. It was non-surgical and should help reduce the pain. I hoped it would work, because it was getting to the point where skiing was no longer an option. The procedure worked unbelievably well. Within four weeks, the pain that I had dealt with for 25 years was almost gone. However, although the pain was much better, I still walked with a noticeable limp. I also found that after so many years of knee pain my hips had started to hurt most of the time. Reflex recommended that I schedule a visit with Kelly Reed at Therapeutic Associates and have her do an assessment.

When I met with Kelly she immediately noticed the limp and determined that the length/tension relationship of the muscles in both legs was out of whack. After so many years of compensating for the pain, I wasn’t recruiting the correct muscles for most movements. Some muscles were tight and short and others were atrophied from lack of use. In addition to aggressive stretching, Kelly started a procedure I had never heard of called ASTYM. This procedure identifies knotted muscles and over time, releases them. Within three visits, my legs started to feel stronger even though I had not changed my workout routine. I could actually feel the muscles release during the procedure. My range of motion improved every visit. I remember after the fifth visit I went for a bike ride. The 18-mile loop I ride usually took me about an hour and 20 minutes, but that day I did it in an hour and five minutes. I couldn’t believe how strong my legs felt. Instead of pedaling with one leg, I was finally able to use both legs. It is amazing to me that after years of dealing with severe pain and almost giving up any idea of skiing competitively again, I am pain-free and gaining strength without surgery or drugs. I would like to thank Kelly and the staff at Cedar Hills Physical Therapy for everything they have done.”

Get Moving Profile: Tom Carey, as it appeared in TAI Magazines October issue