A recent article in Arthritis Today, suggests that regular yoga may also reduce body wide inflammation – the driving force behind many conditions, including arthritis, heart disease and type-2 diabetes. 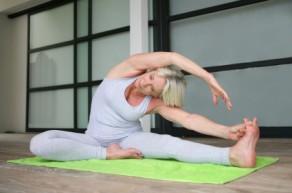 A recent article in Arthritis Today, suggests that regular yoga may also reduce body wide inflammation – the driving force behind many conditions, including arthritis, heart disease and type-2 diabetes.

Here is an excerpt from the article:

Researchers at Ohio State University in Columbus divided 50 women with an average age of 41 into two groups – those new to yoga and experts at the practice.

Scientists then turned up the women’s stress, a proven source of inflammation, by having them perform tasks like holding their feet in extremely cold water and solving difficult math problems without the aid of a paper and pencil. Blood samples were taken several times before, during and after the stressful activities.

Researchers then looked at their levels of several markers for inflammation including C-reactive protein, or CRP; tumor necrosis factor alpha, or TNF-alpha; and interleukin-6, or IL-6. These proteins play a large role in the disease process in people with inflammatory, autoimmune conditions like rheumatoid arthritis.

The research team found that women who were not used to doing yoga had a much greater inflammatory response to the stressful tasks than women who were regular practitioners.

“Practices, such as yoga, that help to tune down stress responses may also be really good for your immune response,” says Janice Kiecolt-Glaser, PhD, professor of psychiatry and psychology at Ohio State and lead author of the study, which was published in the journal Psychosomatic Medicine.

In fact, levels of the protein IL-6 were 41 percent higher in the novices than they were in the experts.

“The experts, when we stressed them, had a smaller stress response in terms of interleukin-6 than the novices. And that would be a good thing as you’re going through your daily life,” Kiecolt-Glaser says. “Yoga may do some measurable good against stress.”

The researchers say their findings show stress has an immediate impact on people’s blood and bodies and yoga is a simple way to reduce its impact both short and long term. But because yoga has so many components – movements, breathing, mental elements – researchers say it’s hard to know which individual parts are responsible for the stress reducing effects.

But Dorothy Guy, a 56-year-old-yoga instructor at the Barbara Greenspun Women’s Care Center in Las Vegas, Nev., thinks she has an idea. She has arthritis in her hips and thinks, based on personal experience, that the benefits of yoga come from all the components.

Guy says before starting yoga, patients need to interview instructors to make sure they understand a person’s individual challenges and needs and once you begin, she says it’s important to practice at your own pace. But no matter your age or athletic ability, yoga is an option, says Guy.

“Yoga is something anyone can do. I teach elderly people sitting in chairs,” Guy says.